During a perfect regular season, Coach Craig Kolek hits 1,000 career wins and is named GNAC Coach of the Year.

Rivier University Men’s and Women’s Volleyball Head Coach and Associate Director of Athletics Craig Kolek has had a great year—not a good year, but a great year. The Women’s Volleyball team had a perfect, 13-0 regular season and advanced to the Great Northeast Athletic Conference (GNAC) Finals. Based on their exceptional performances, Kolek’s players Avery Pollard ‘22 and Sofia Pawlusik ’24 were named 2021 GNAC Women’s Volleyball Player and Libero of the Year, respectively.

On October 20, the Women’s team claimed victory amid fierce competition from the Johnson & Wales University Wildcats. This match marked Coach Kolek’s 1,000th Men’s and Women’s Volleyball career win. The milestone win follows his 2017 achievement as the only coach in volleyball history at all levels (D1, D2, D3) to reach 400 wins coaching women and 400 wins coaching men.

Given his success, it’s no surprise that Kolek was named 2021 GNAC Coach of the Year for the sixth time in his career, in addition to his 2011 induction into the North Eastern Collegiate Volleyball Association Hall of Fame as a coach. This year he celebrated his 23rd season coaching men’s volleyball at Rivier, and his 22nd season leading the women’s team. During his tenure, Rivier Men’s and Women’s Volleyball teams have won a combined 22 Championships. 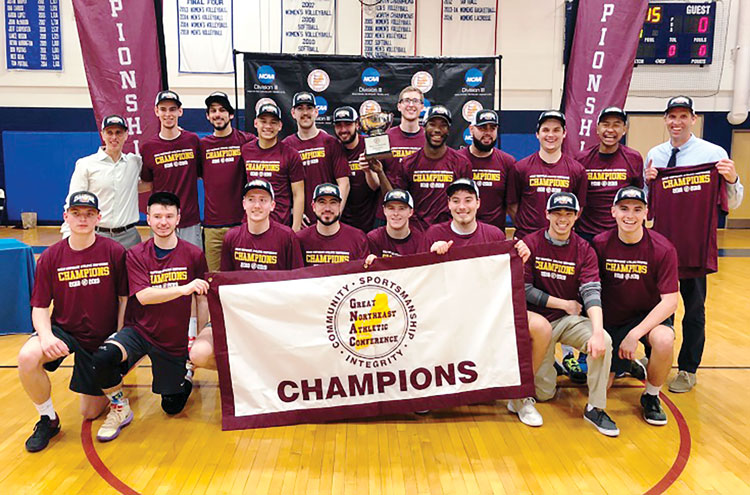 “My success is from the hard work of the student-athletes,” says Coach Kolek. “They are the ones who spend countless hours in the gym and the weight room working on their game to make Rivier a program to be proud of.” This is a top-down work ethic, shared between coach and players.

Having worked together for more than 20 years, Director of Athletics Joanne Merrill offers unique insight into Kolek’s leadership. She shares, “Craig’s success comes from all things inside him—his love and knowledge of the sport, his desire to help all of his players achieve their maximum potential, and finally his character and all he hopes to teach his team not only about volleyball but about life.”